Why “Digi” Jeff? Simple: Personal branding to make my presence synonymous with my accomplishments. 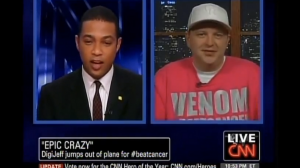 Back in 2002, with official hip-hop sites lacking content or updates between an artist’s album releases, I created a network of sites that kept fans informed and entertained between records. There was a gap in the information that fans wanted so I built 118 sites and received 70k unique visitors a day at peak. I managed all of these sites alone with gunitworld.com, a site for up-to-date information on G-Unit and 50 Cent, being my most successful until 2008 when they were sold.

From 2006 through 2010 I hooked up with Grammy award winning artist Chamillionaire to manage his digital / social media accounts. With my direction and experience we incorporated his music into social media, sparked interest through multiple freestyle leaks, and propelled a viral Photoshop campaign through current trends of popular culture. We defined innovation by breaking trends as Chamillionaire became the first artist to debut a music video on Facebook and we set the standard by utilizing Vid.ly to stream video responses live from the fans on his site.  Over the years of our business partnership I served as an invaluable asset in fusing social media and music while bringing fans closer to the artists and music they love through calculated campaigns and digital design.

In 2009 Chamillionaire and I made a bet over his newest track, “Good Morning” hitting #1 on iTunes: If it did, I’d skydive out of a plane with his album title across my shirt. Less than 36 hours later the song exploded to #1 and I was strapping up and preparing to leap from 3,500 feet in the sky. Rather than admitting defeat and taking my licks in stride, I decided to turn the situation around and  promote a noble cause in a big way. I leapt from the plane in a pink shirt emblazoned with Chamillionaire’s album title and the social hash tag of #beatcancer to help bring awareness to the awesome social media campaign. We spread the word and for every #beatcancer mention on Twitter or Facebook $0.01 was donated to the campaign. After 24 hours, and 209,771 mentions, we set a Guinness World Record and Tamara from #beatcancer got me on CNN with Don Lemon to talk about the experience. After such a successful campaign we did #beatcancer again in 2010 with the help of Alyssa Milano, Paul Wall, Chamillionaire, Chad Ochocinco and others.

In 2010 I became intrigued with developing and selling Facebook apps after hearing about my friend’s Ryan Merket and Nalin Mittal’s new startup company AppBistro. The variety, possibilities, and creative freedom were too enticing to pass up and with the countless ideas I had swirling in my head I immediately began building apps using Facebook’s API. I started working with Paul Wall’s digital marketing with Warner Brothers on his “Heart of a Champion” album and combined my love for music and my newly discovered passion for Facebook development. I’m currently working to incorporate Facebook’s API with YouTube, iTunes, and Plancast and remain intrigued with the digital world of Silicon Valley and startup companies in general.

In 2011 I focused my talents and built a plugin for a local Denver company that transformed the content of their regular sites into mobile friendly versions for mobile devices. I later took on a project for the Facebook app BookMarketer, an app for authors to market themselves via Facebook. Finally, in mid-2011 I helped Carmelo Anthony and his wife La La with a live Ustream event from their Denver mansion to celebrate La La’s Twitter milestone of 500k followers. The event aired as part of the VH1 reality show “Full Court Life” and I can be seen in the first episode.

2012 I am focused on ReturnMore, which is a company that will have a lot of ideas I been sitting on.  My first concept is ReturnMore Offers which a business can provide offers to their customers and build a connection on Facebook. The offers can be unlocked and redeemed via smartphone or tablet.

Who am I? I’m an entrepreneur, developer, inspirer, tech, social media guru and digital strategist I define innovation, invention, and imagination through passion, ambition, and motivation (P.A.M.) I digital brand with celebrities, simplify technology to simplify life, and I’ll be the name you’ll be hearing in the future. I am “Digi” Jeff.

Many thanks to David Prete for writing this for me!

“Digi” Jeff Lange is an entrepreneur located near Denver, Colorado. Most notably known for building a music network fan site peaking 2,000,000 unique visitors a month from 2003-2009 marketing rapper 50 Cent online along with his record label G-Unit Records. Working with grammy nominated music artist Chamillionaire from 2006-2010 while losing a bet on twitter and having to jump out of a plane with a title of his album on his shirt and interviewed on CNN. Working with many notable brands; WWE, Denver Merchandise Mart, Sony Records, Ribbon, Paul Wall, Carmelo Anthony and others. Several freelance projects over the years ranging from building the Denver Mart’s new website to helping a local orthodontist increase their traffic with SEO. As of mid 2014 Jeff is seeking a position with a digital agency to provide his strategy and creativity along with his extensive skill set. 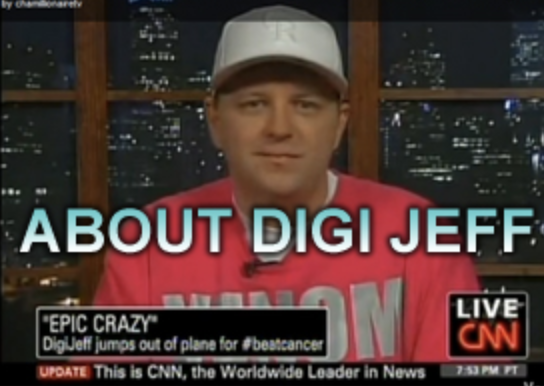